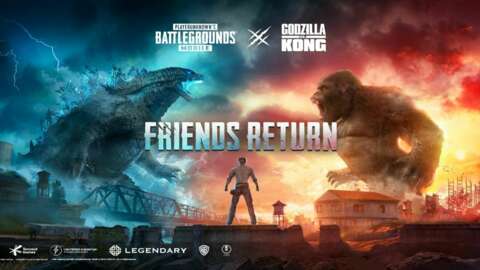 Godzilla and King Kong with PUBG Mobile yet, as PUBG developer Krafton Inc has teased a Titans: Last Stand event coming May 25.

The 20-second teaser trailer shows Godzilla and Kong facing off, with Mechagodzilla appearing to fight them both. The event will “introduce players to a never before seen chapter of the Godzilla vs. Kong story that can only be experienced in-game as part of the Version 1.4 update” according to the official press release, and it will run until the end of the PUBG Mobile/Godzilla vs Kong crossover event on June 8.

No details have emerged on whether or not players will have an influence on the coming kaiju battle. However, there are a few brief snippets of a player shooting a minigun from a helicopter in the trailer, implying the event will be interactive to a degree.

PUBG Mobile’s partnership with Godzilla vs Kong began in early May 2021, with the Version 1.4 update adding the two giants–along with Mechagodzilla–to the battle royale. The monsters would appear at random times and destroy parts of the environment, giving players in the area access to extra loot and monstrous NPCs. The event coincides with the release of Legendary Pictures’ Godzilla vs Kong in theaters and on HBO Max.

GameSpot may get a commission from retail offers.

Back to top button
Close
Close